Can We Measure Energy in Pigeons? Part 2 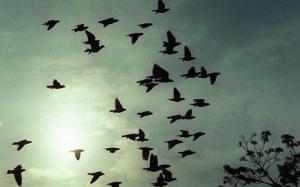 The former use energy more efficiently. Now that we know exactly how much energy a pigeon uses per hour of flight, can we, if we know how much fat our feed contains, calculate how much a pigeon needs? Example: Let’s suppose your pigeons were being entered for Orleans, and that the race would normally take 6 hours of flying for our pigeons. As just mentioned the pigeons use carbohydrates as the fuel to fly for the first hour. The last 5 hours the fat reserves in the red muscle fibers are used as fuel. Let’s use an average of 3.0 grams of per hour.

The birds therefore need 5 X 3.0 grams = 15 grams of fat stored in the red muscle fiber. If we know how the fat content of our feed, we can calculate if this feed is high enough in energy. If we have a feed with 5% fat and we feed on average 200 gram of feed per bird per week, then we have given the pigeon 10 gram of fat reserves, which is not enough for this race. If we had a feed with 9% fat (=18 gram of fat) then it is too rich for this flight. Statements such as: “this feed has the ideal fat content”, are relative. Naturally we can make a feed lower energy mix by adding a diet mix with a 3% fat content. We will always have to keep in mind the total hours on the wing we expect for the upcoming flight
.
A good widowhood mix has a high fat content, a high usable energy content (carbohydrate and fat) and relatively low legume content. If these amounts are not provided on the bag, then they are likely obtainable from the manufacturers literature. Loading up with too much fuel is not suggested. The fat depots will eventually overfill and the pigeon will lose form. The pigeon has to carry the extra weight and this will require extra wing beats to keep the pigeon in the air. A Formula 1race car driver wouldn’t think of filling his fuel tank for the last 5 laps of a race. The car would be too heavy and slow. Costly seconds would be lost. Too much slows the birds down and not enough can have catastrophic consequences for our racing pigeons. Most of the mistakes are made by the pigeon fancier not the pigeon.

When all the birds’ energy reserves are used up, a bird with character and guts will keep flying and start converting its own protein into energy. This is coupled with enormous consequences. The pigeon literally burns up its own body (organs and muscles etc.). These birds usually are never able to perform to their previous standards. For short sprint (Vitesse) races carbohydrates (glycogen) are much more important than for long distance (fond) races. Results of tests show that while flying on glycogen and carbohydrates (fats) in the blood stream and those stored in the liver, the pigeon can obtain higher speeds. This can be seen on the chart below. In this example the pigeon obtains a speed of 100 km per hour during the first hour of flight. After that the speed drops down to +/- 85 km per hour. This is the speed of flight obtained while burning the fats in the red muscle fibers.

Ten minutes longer flying on energy from carbohydrates means a 2-½ km lead. This lead during a sprint race is impossible to overcome. This of course is all theory. Pigeons are not horses that run their race around a racetrack. They can’t (not yet) be followed. Many things can happen on the way home. An optimal orientation, the release, the wind, the list goes on, all play a role. But, on sprint races of 250 to 300 km, if we can increase the glycogen reserves and increase the amount of blood fats, surely it is worth the effort. From research on the use of carnitine it was discovered, that pigeons at about the 400 Km mark had a drop in speed because the muscles were tired. The term used in other athletic events “they hit the wall” comes to mind. After awhile the birds recovered and could keep flying at a decent tempo. The last kilometres as you can see are the hardest and the speed will gradually decrease.

On longer races the fat reserves become much more important fuel supply. Unlike the bike riders taking part in the “Tour de France” birds cannot eat or drink on the way, or rather this is what we want to overcome. They cannot replenish their glycogen reserves and become dependent on the reserves stored in their bodies. Besides fuel the pigeons also need oxygen.

Muscles cannot function properly without oxygen. The pigeon has to have sufficient red blood cells; these carry the oxygen to the muscles. Measurements on migratory birds have shown that proteins are also used during migration. Thus, the more difficult the flight, the more proteins are used. You can compare it to your car. If you go to the store to do some shopping, then you would not use your dipstick to see if the oil levels are down. If you hook up your trailer, loaded with all your belongings and drive over the mountains to Switzerland, then the first thing you should do at the end of the day is check the oil.

The pigeon must eliminate these used proteins and new protein has to be supplied.

See also: Can we measure energy in pigeons? part 1

7 thoughts on “Can We Measure Energy in Pigeons? Part 2”