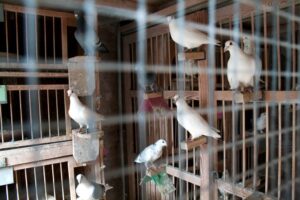 The quality of our pigeons is always NUMBER 1. Without athletes, we can never determine how good or bad a system is. I have witnessed many people that believe because they are trying a new system, they will do just as good, or better than before but in many cases, they have made some major mistakes. So now they are asking their pigeons to perform better than ever even though they have already sabotaged the season by taking the pigeons out of form before the season began.

There are many different systems within our own system:
First thing we do each year is to determine a date on which we will begin to pair our pigeons. That date and the way you do this is part of your system even if you think you are doing exactly the same as someone else.

Our next thing that needs to be considered is our feeding system. Again, even if you feed exactly the same feed formula that another person does, you may still be different. For example; how many times you feed each day is only one part of feeding. How much you feed is another opportunity to be different and even if someone else gave you a weight formula, your loft conditions could be different that the person which you are trying to copy. If your loft is colder or if your pigeons have a faster metabolic system, the amount of feed could be very different at each loft to attain the same level of form. Feeding the exact formula of another could be a disaster.

The loft itself is also a variable and can make a large difference in your system as compared to the person you are attempting to copy. More pigeons in less space will give you much different results when compared to a SIMILAR loft that has less pigeons in the same amount of space. To complicate the loft issue more could be where the loft is positioned in the yard. The effects of the wind can be quite different for your loft when comparing to another loft. Even if you move the same loft from one place to another, the requirements of that loft could be substantially different than it’s previous.

Let’s move along to the birds:
Again even if you have full brothers and/or sisters to your friends’ pigeons, they are still not exactly the same. Much as we have brothers and sisters, our parents are the same people but some of us had our genetics aligned slightly different than our siblings. In my family I got the good looks and the brains where as my older brother got more height, but less hair and my younger brother ended up getting more muscle (his words and not mine) as he weighs 150% of what I do. So even though we may have full brothers and sisters to our champions pigeons, there may still be great diversification there.

Training:
Now we must look at training and again realize that there are still no cake formulas for success. Doing exactly what you think the champion is doing does not mean we ARE DOING what he does. If the champion trains from a certain spot every day, even though you go there each day, all of the above things can play a large part as to whether that same spot is good for you. My example is that I train from the same spot that many others may go past but at the time of day that I train as compared to the time that they train WILL RENDER different results. Even though we all can do a certain amount of work, there reaches a point in the workout where the muscles finally are challenged and at this time is when progress is made. Up until you hit the critical point, the muscles have not been challenged.

Moult:
The moult is another very critical part of any system. There are many roads to Rome. Which one you decide to follow will decide when you get there. For years the natural moult was that of choice but with all the young bird specials being popular, it soon was realized that the pigeon with the best feathering has an edge. Unless your pigeons are as slick and fully feathered as possible, you have given an edge to those competitors that have this type of feathering. For years we all sent pigeons with tail feathers missing and coverings not tight and even some head feathers missing but they were bred and trained for a specific race so when that date came, they were shipped. Now we are much more professional about preparing our pigeons so they are in better health, feather, and attitude and all of these things help the pigeon to avoid some of the natural disasters such as hawks, etc., etc.,…..

Keep an eye out for the third and final part of this article series coming up next. In part three we will discuss “the racing system” and the “rest period”. Your deffinetly not gonna want to miss it.