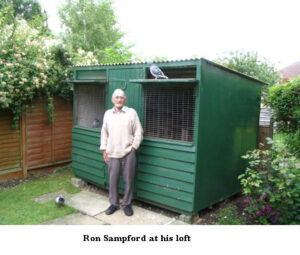 In the market town of Ware in Hertfordshire England there is an amazing racing loft. It is the loft of Ron Sampford. When I first saw it I couldn’t quite believe it. It is only 8 foot by 5 foot. What’s so amazing you might ask? Well that is his only loft. No separate youngbird loft, no widowhood loft, no lofts for cocks and hens no stock loft, just one tiny loft and what’s more, from this one loft he races the whole program. With such a tiny loft you would think that it must be really crowded inside, he must have his birds standing on top of each other, but no. When I visited Ron he had only 7 pair of old birds and the smallest youngbird team that I have ever seen………a grand total of six. Yes six. Surely he can’t compete with such a small team? Well Ron likes to specialise. He loves the distance races and just look at his results. When he flew in the Three Counties Federation from Lerwick Ron was 1st, 3rd, 6th and 15th federation. When he topped the federation from Lerwick he was also 3rd federation from Fraserborough on the same day! A great performance when you consider that both racepoints are in Scotland, Lerwick 578 miles and Fraserborough 420 miles. What is even more remarkable Ron only sent 1 pigeon to Lerwick and a paltry 3 pigeons to Fraserborough.

In one Three Counties race Ron sent only six pigeons. It was a really strong south east wind and it turned out that there were no pigeons on the day. The next day Ron had all six arrive he clocked 4 of them and if he had clocked all six he would have had the first six in the club but he was happy to settle for the first four. Many fliers never saw a bird. In one Amalgamation race, combining the North London federation, the Chilterns North Road federation and the Central North Road federation Ron was 17th, 20th, 22nd from Thurso.
Thurso is Ron?s favourite racepoint. He now flies Thurso in the London North Road Combine. His Thurso record must be one of the most consistent, especially for someone who only has such a small team. Over the years Ron has been 17th Combine, 37th Combine, 58th Combine, 40th Combine, 99th Combine. One year he was 5th and 49th Combine 5327 birds, and Ron has also been 3rd Combine 6,208 birds when there were only three pigeons home on the day.

In 2000 the London North Road combine from Thurso was a real stinker. The birds were liberated at midday in pouring rain, the race turned out to be a smash with hundreds of birds missing, but was Ron worried? No. He went on to take three positions in the first 100, winning 37th, 43rd and 91st Open Combine. In 2001 again the Thurso race was a stinker, only 17 made it on the day Ron had 2 in the first 100. He only sent 5 pigeons to this race, in fact he usually only sends five, and while many other hardened fanciers send big teams and lose pigeons from this dreaded racepoint, Ron gets all his five home with no trouble, and all in race time.

So why is Ron so successful at the distance with such a small loft and such a small team. Well if you look at his history, in the past he has flown against some of the great distance men in the pigeon world, such great names as Peter Titmus and Marley Westrop. A great schooling in distance flying.

The other thing that makes Ron so consistent at the distance racepoints is his pigeons. They contain out and out distance blood being mainly Westcotts. They are also reasonably inbred. He has had Westcotts for years with some given to him by the late great Frank Blackmore from Tottenham who was another great distance flyer. Over the years Ron has only really introduced one different breed of pigeon into his colony and that was a good Janssen that his brother Dave gifted him.

Ron’s enthusiasm for the distance racing is shared by his wife Pat. It was Pat who bought Ron his one and only loft. She told me that it was 44 years ago that she bought Ron the loft, for a grand sum of GBP22. She bought it when they were on honeymoon and it has stood there in their garden ever since, and it still looks like new. It has an asbestos corregated roof, one door at the front and two wire windows. It is painted green. The pigeons trap just above the windows. It is refreshing to see such a simple set up. No fancy tiled roof, no complicated ventilation system, no closed in glass front, no darkness shutters. Just wire windows and one door.

So how is it that Ron can still compete successfully with such a small set up? Well Ron’s pigeons have got a great constitution and he rarely, if ever, loses a pigeon. He invariably gets them all back in race time. To illustrate how tough Ron’s pigeons are, one year he only bred one youngbird. Yes one youngbird! He trained it everywhere. He had a friend Danny Riggins who was a lorry driver, and as he was going to Peterborough which is about 50 miles away, he asked Ron if he could take Ron’s one youngbird. Ron agreed. When Danny reached Peterborough it was pouring with rain. Danny phoned Ron and told him that the weather had turned bad and he would bring the bird back. Ron told Danny that it was just as bad at this end but not to worry just let the pigeon go, she can make it. Danny reluctantly let the pigeon go and within a couple of hours this single youngbird, a small hen, alighted on the loft and went in as if to ask what all the fuss was about. That single young hen went on to fly the whole program from Peterborough through to Morpeth. That particular Morpeth which is approximately 250 miles north was a stinker of a race. There was a strong south westerly blowing but that young hen went on to take 36th open Morpeth 250 miles and won the club by over 1 hour! That must go down on record as being the smallest youngbird “team” ever. One! A great performance.

That particular example is not just a one off. Ron rarely loses youngbirds. Take for example last year, he again only bred 6 youngbirds. At the end of the season he still had five of them, he would have still had all six but he had to remove one of them as it got injured. The other thing that makes Ron pigeons special is their tame and relaxed temperament and the fact that Ron has a great affinity with his birds. Ron told me that when the pigeons are out he dare not leave the back door open or they will follow him into the kitchen. Ron has a small pond by his backdoor and during exercise they will fly down to the small pond and have a drink and a bath. They are perfectly relaxed doing this. One hen that Ron had that was a grizzle used to have a bath in the pond and then walk into the house through the kitchen and sit drying itself in front of the fire next to the dog! Ron said that sometimes on returning from a race the birds will fly straight to the pond for a quick drink before flying to the loft.

The youngbirds are just as relaxed. One year he let out the youngbirds and he went back inside the house. He came back out to look for them and 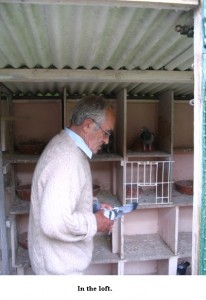 as they weren’t to be seen he thought that they must being flying off somewhere. He could hear the two little girls next door playing in their sand pit and when he looked over the fence there were his youngbirds, in the sandpit with the two girls, perfectly at home. What is also remarkable about Ron’s loft is his feeding. You would think that he has a really complicated feeding regime, with high fat diets and massive carbohydrate loading before a big race but no, you’d be wrong. All that Ron feeds is beans. I’ll repeat that in case any of you think that this is a misprint. Beans! Yes beans, just beans and nothing but beans. I can hear the continental distance fliers giving out cries of disbelief but I’ve been there and seen it. Just beans. He does trap with a pinch of canary seed but after that its beans.

I asked him what he put in his water…..his answer……just water. What about vitamins, anti-canker treatments, anti-coccidiosis treatments…..he never uses them. All he does is vaccinate against paramyxovirus then after that nothing. His pigeons are hard. Ron told me that they have never had canker and I must say they all looked a picture of health. His pigeons are let out twice a day. Ron said when he had a Jack Russell terrier he left them out all day. The birds get trained twice a week from about twenty miles but as Ron doesn’t drive his good friend Bill Watson takes them. Ron flies natural and believes that pigeons fly the distance better if they are mated for life with one partner. Ron does like to fly hens. He prefers it if they are sitting 10 days on eggs but if he has spare hens then they go celibate. I remember one year when Ron had many more hens than cocks, but that didn’t bother him he just sent hens.

It was a very refreshing experience seeing Ron’s loft and birds. It illustrates that you don’t need hundreds of pigeons to compete, you don’t need massive lofts and big youngbird teams. You don’t need complicated feeding regimes or expensive medicines. You just need good pigeons with a tough constitution. Oh, and one tiny loft. 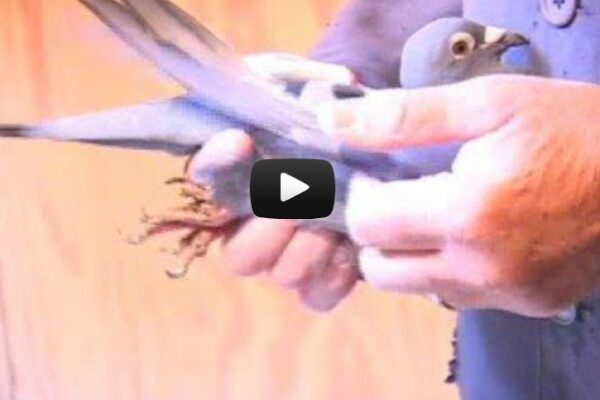 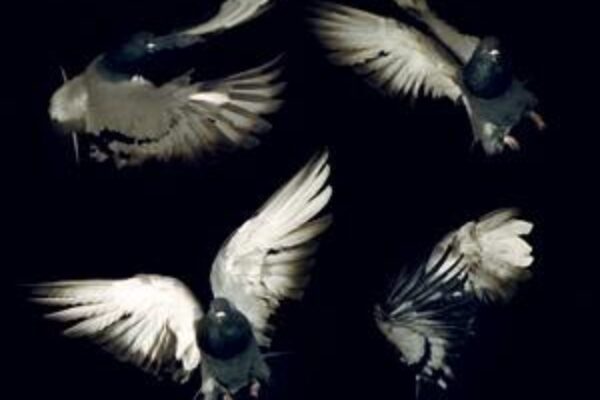 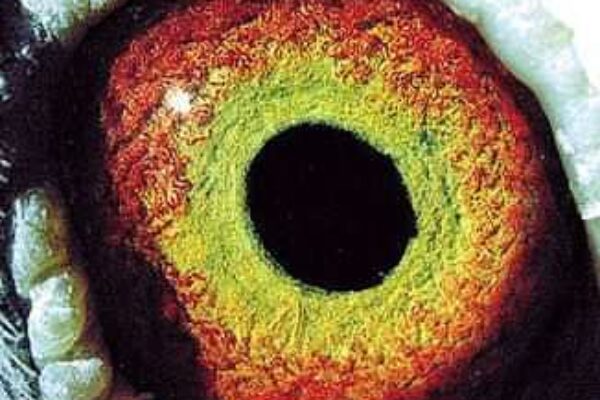 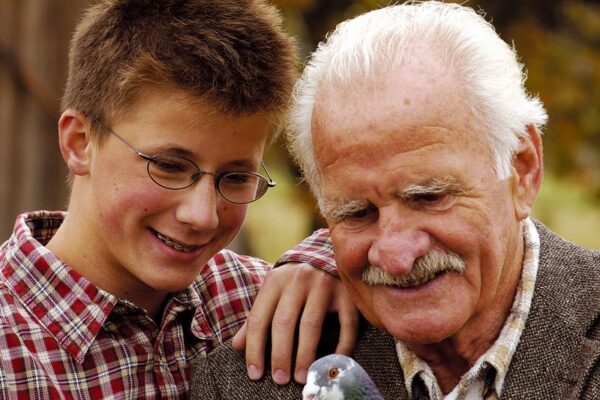 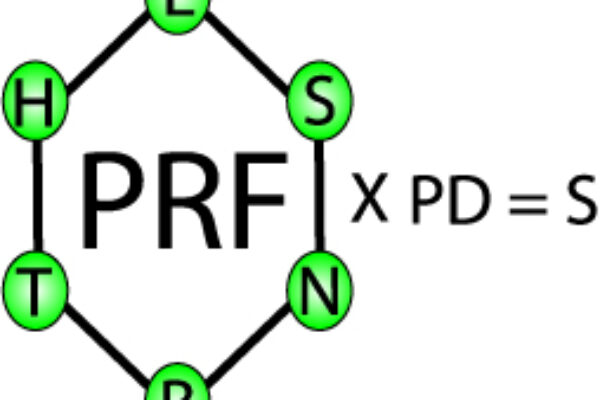 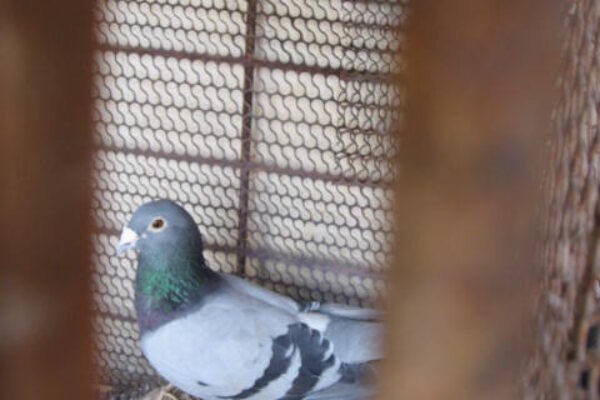